The trend of miniature of electronic products leads to complicated structures of products, which promotes the prevalence of multi-chip module. The advent of core module is a new challenge for SMT. However, some problems such as false welding and continuous tin electrodeposit come up in the new product loading owing to the large scale of substrate and thermal theory.

False welding refers to the circumstance that tin layer isn't fully plated on the surface of weldments that aren't fixed between by tin, metal alloy isn't generated between component welding face and PAD, pressure possibly makes components become loose and suffer bad contact and the minimum height of soldering points is smaller than 25% of the value of the combination of the minimum height of soldering points plus solderable height.


The common reasons for false welding include bad quality of tin paste, compositions of soldering flux, the oxidation layer on component pins, bad surface finish of PAD, the setting of soldering parameters and unstable reflow soldering.


• Analysis on the reason for problems


a. Analysis on core module substrate


In the early development, FR-4 Tg150 (material>145) is applied as the core module substrate material and relatively thick solder mask film covering on the substrate bottom side. In the process of reflow soldering, slight buckling deformation takes place as a result of low Tg so that soldering reliability is reduced in the second reflow soldering with the advent of false welding.


b. Analysis on the amount of tin paste


a. Substrate material and experiment design


b. Experiment design on stencil cut-out 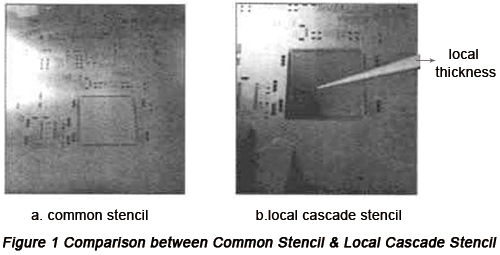 
After the pilot production and comparison between Scheme A and B, continuous tin electrodeposit takes place at the resister pack position, based on which it can be concluded that Scheme B is better.


Prior to reflow oven entry, the task of gel dispensing has to be implemented and positions can be determined under the effect of gel solidification and shrinking with the function of circuit module fixing so that deformation and displacement of module substrate can be effectively reduced when soldering.


Thanks to a series of improvement measures including stencil design improvement, reselection and positioning of PCB material and improvement of manufacturing craft, the amount of tin paste and climbing height of tin in the core module have reached IPC Standard in the process of soldering. The fraction defective of core module process is greatly reduced from 686PPM to 23PPM so that the reliability of products is ensured. The data in the following table best indicates the result.

The application of core module is capable of accelerating the research development and upgrading progress of automotive electronic products. In the stage of new products, transplantation can be implemented so that development cost and complexity can be reduced. However, bad points come up in the early stage of pilot production as a result of the large scale of core module and high manufacturing craft requirement so that its reliability will possibly shrink and the module fails to be better applied.


Belonging to PCB, core module has to go through a series of processes including high temperature reflow, storage and another high temperature reflow during which PCB deformation, false welding and continuous tin electrodeposit. These problems concerning core module have been successfully solved through experiment and pilot production of products so that more opportunities will be provided for the application of core modules and the module application progress of automotive electronic products will be accelerated as well.