In the process of PCB soldermask manufacturing, the craft of PCB continuous double-side printing liquid soldermask by silkscreen printing nail-bed has been massively applied. Since relatively big differences take place between PCBs in terms of aspects of design including thickness, pattern distribution, via diameter and via distribution, the manufacturing of silkscreen printing nail-bed is extremely difficult. If the distribution of copper nails on nail bed is far from being reasonable, soldermask thickness uniformity is easily caused. The bad result is either the color aberration of soldermask appearance, bad soldermask imaging or solder bridge with broken resistance, leading to rework or scrap. Therefore, detailed instructions have to be established to pertain to nail welding in the process of soldermask silkscreen printing in order to ensure the quality of nail bed.


To manufacture silkscreen printing nail bed, supporting nails should be deployed at the place where the bottom board of nail bed is compatible with PCB board edge or via positions. The complexity of manufacturing process leads to relatively high requirement of technology, so it has to be completed by experienced workers who still possibly suffer from errors in terms of lack of nails welding, low nail distribution density, and position deviation of nail distribution when they are dealing with highly-complicated boards or boards with new type model.


For three types of nail distribution density (spacing 5.0cm, 8.0cm, 10.0cm) and PCB thickness (0.8mm, 1.5mm, 2.0mm), experiment is carried out through cross matching and the experiment is designed as Table 1.


A bare copper board with the dimension of 457mmx610mm is applied as the nail bed base plate on which copper nails are evenly placed in the mode of array with green transparent tapes fixed. Spacing between copper nails is respectively 5.0cm, 8.0cm and 10.0cm. On the nail bed with different nail distribution spacing, the distance between external nails and the edge of bottom board should be symmetrical vertically and horizontally to ensure that thickness differences won't take place because of the wrong positions of copper nails in the process of silkscreen printing.


Bare copper board with the size of 17''x23'' is applied with the thickness of board 0.8mm, 1.5mm and 2.0mm. Each type of boards with different thickness should be provided with 6 pieces and the thickness of copper is 1oz with filet. Take the most commonly-used green liquid soldermask ink as an example. The silkscreen printing parameters are displayed in Table 3 below.

In order to obtain the data of dry ink thickness, one nail bed of 5.0cm and one board for each type are prepared. The dry ink thickness data is read within the category of film thickness measurement test. The key experiment data accumulation method is illustrated in Table 6 below.


Based on the analysis on thickness of nail bed printing soldermask for different nail distribution spacing, the soldermask thickness uniformity can be calculated according to the following formula:

The analysis result is shown in below table and figure. 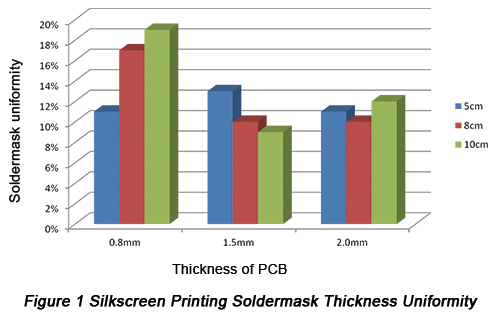 • Dry ink thickness change on the surface of board

Previous articleMethods to Strengthen the Anti-Interference Ability in PCB Design