Along with the fast development of very large scale integrated circuits (ICs), electronics assembly demands can never be met by traditional package types and newer packages come into being due to the encouragement of demands in terms of higher integrity, smaller board size and higher I/O count. Among all the newer types of packages mentioned above, BGA (ball grid array) package is a primary type with the widest application fields due to its diversity defeating multiple limitations featured by traditional packages. From the perspective of elements concerning soldering technologies, BGA package is hardly different from traditional packages, QFP (quad flat package) for example. Nevertheless, pins are replaced by solder balls, which can be regarded as a revolution in electronics assembly and brings forward the advent of derivative packages such as CSP (chip scale package). Right now, BGA soldering has still to be implemented with traditional SMT (surface mount technology) applied and BGA soldering can still be carried out in ordinary SMT assembly equipment. This article will discuss some factors affecting the application of BGA assembly technologies including BGA pad design, solder paste printing, mounting alignment accuracy, soldering temperature curves and soldering defects.

BGA packages come in a couple of classifications based on different pitches. Generally speaking, BGA pad design should take CAD tracing feasibility and manufacturability of PCB (printed circuit board) into initial consideration. BGA pad comes in numerous types as well and they can be freely selected when space is allowable with the following types commonly used. 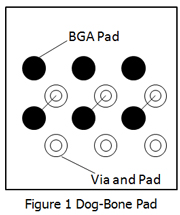 Dog-bone pad takes advantage of via to lead trace to other layers so that some limits have been laid to pad size. Due to the existence of vias, some defects tend to be caused during PCB manufacturing process such as soldering bridging due to solder mask falling off. Therefore, pad size has to be designed by rigorously conforming to practical manufacturing level in order to minimize soldering defects generated during BGA soldering and leave some space for BGA rework in the future.


Via in pad develops along with the progress of microvia technology in PCB fabrication.


During PCB fabrication procedure, if solder mask deviates along the same direction, BGA pad won't be influenced, which is beneficial to BGA soldering. But this type of pad tends to be broken during solder mask rework at the edge, which is bad for rework effect. Once NSMD pad is used, pad will be relatively small, which is beneficial to via pad distribution and tracing. This type of pad structure, however, results in decreasing bonded area between soldering joints and pad and further reducing soldering joint bonding intensity. In a word, both pads feature their own advantages and disadvantages and corresponding pad can be determined based on technology consideration.

Accurate positions of BGA components on circuit board totally depend on the precision of chip mounters most of which contain specific positioning system which is capable of helping achieving accurate positioning of BGA components. Furthermore, some chip mounters even can inspect BGA solder balls in terms of their co-planarity and recognize some defects such as missing balls, which is extremely helpful for the improvement of BGA soldering reliability.


Furthermore, some other measures can be made to further improve mounting accuracy of BGA components and. For example, local fiducial marks are set at the external part of BGA pads or a couple of fold lines are set as fiducial marks for manual inspection after assembly, both of which have been verified effective in practical manufacturing.


Based on properties of BGA structure, it's hardly possible to inspect a single soldering joint of BGA component. However, the complete packaging body should be reworked.

With over ten years' experience handling PCB Assembly demands from worldwide clients, we have the capabilities to solder almost all kinds of parts into circuit boards, including BGA components. If you have any questions or concerns on PCB Assembly, reach us for knowledge about our PCB solder capabilities and discuss custom PCB population projects. Feel free to click below button to request BGA Assembly Price! It is TOTALLY FREE!