Influence of Relative Delay on Signals 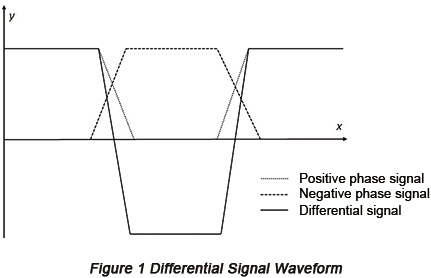 
In conclusion, too large relative delay between differential pairs may cause false triggering of signals, signal reflection, EMI and time sequencing problems. However, the influence degree of relative delay signal depends on the scale factor compatible with signal Tr. When the scale factor is 0.05, distortion of differential signals can be almost ignored. However, for common mode signals, when the scale factor is 0.05, voltage fluctuation of common mode signals can be controlled at approximately 5%. Then, even in the situation of full reflection, the reflection voltage stacked on signal lines is just 10% of original fluctuation, which is usually an acceptable value. Therefore, in the process of high-speed PCB design, relative delay of differential signal line in the routing regulation rules can be set to be 0.05 Tr that is capable of meeting the requirement of signal integrity.

The following three methods can be applied to obtain the value of Tr:
• Rise/fall time can be directly obtained from component manuals. However, in most situations, this parameter isn't provided.
• Value of Tr can be obtained from Ramp keywords from component IBIS (Input/Output Buffer Informational Specification) model. Rise/fall time parameters under Ramp keywords are generally measured at output port connected with a resistor of 50Ω, which are usually 20% to 80% of final voltage time. Since the parameters are obtained without considering the influence of package, it's strict for us to use rise/fall time as the value of Tr.
• The value of Tr can be estimated according to the minimum clock frequency or maximum clock frequency of output signals. Because distributive rise edge is approximately 10% of clock frequency in most high-speed digital systems, the value of Tr can be estimated with the minimum clock period Tclk provided based on formula: Tr = Tclk x 10%.


The estimated value obtained through clock period is usually strict because package parasitic parameters or loading of components will make the inherent rise/fall time in transistors greatly slowed.


The third method usually leads to a list of reference values within relative delay control category between differential pairs, as shows in below table.

Take DQS (Data Strobe) differential signal between TSM320 and MT41J256M16 as an example, Cadence simulation software is applied to transmit DOS signal to DRR3 memory to simulate memory control chip, analyze its influence on data signal establishment holding time and verify the analysis above. Simulation circuit is shown in Figure 2 below. 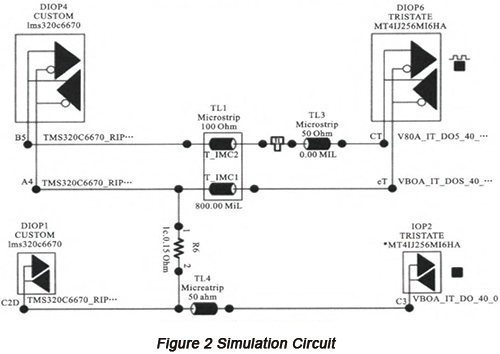 
Simulation is carried out to the differential isometric circuit. Figure 3 illustrates the output signal at the positive phase terminal of differential signals. Through measurement, the rise time is approximately 216ps while fall time 219ps so the minimum rise/fall time Tr should be 216ps. 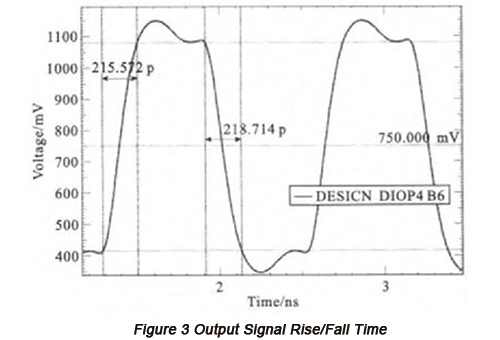 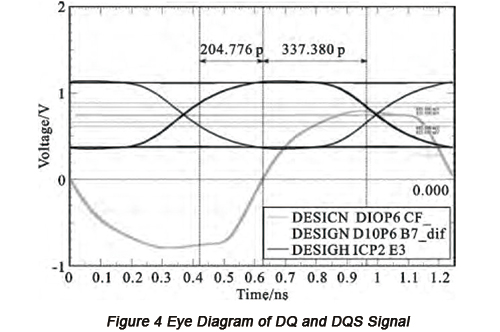 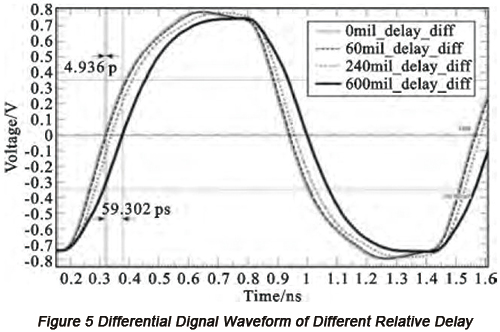 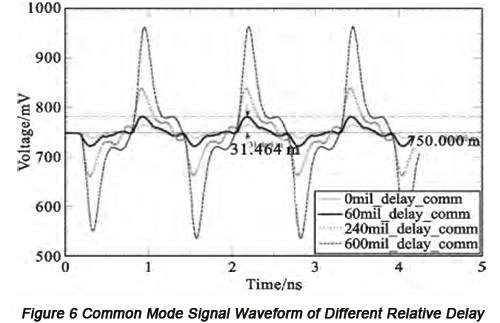 
In conclusion, simulation result is compatible with the result obtained through math function diagram analysis. When the relative delay between differential pairs is less than 0.05Tr, the influence on signals is quite small.

Next articlePCB Design for Radio Frequency Circuit and Electromagnetic Compatibility