Nowadays, the transmission rate of high-performance computer interconnection network with the application of high-speed serial transmission has developed into FDR (Fourteen Data Rate, 14Gb/s), the 4th generation from the primary SDR (Single Data Rate, 2.5Gb/s), DDR (Double Data Rate, 5Gb/s) and QDR (Quad Data Rate, 10Gb/s). The design of PCB (Printed Circuit Board) with interconnection and switch board and interface cards that are essential to the formation of Internet has entered FDR high-speed and high-frequency field. Since the rising time of FDR signal has drastically reduced to the magnitude of 10ps, a series of problems concerning signal integrity has become the key features to determine the possibility of functionality implementation and reliable operation, such as attenuation, crosstalk, reflection, electromagnetic interference etc. Based on the features of FDR interconnection chips including multiple ports, multiple channels, multiple power categories and high energy consumption, multiple interconnect chips are always required to be integrated on a single interconnection board in order to increase throughput rate. On a board with limited space, on the one hand, some requirements have to be met including component layout and heat dissipation, routing with high density, long distance transmission across the back of the board and integrity of all kinds of signals. On the other hand, some elements have to be taken into consideration including PCB design period, PCB fabrication technique limitations and cost control. Therefore, it is extremely difficult for design implementation and simulation verification. Based on PCB design example of FDR interconnection and switch board, this article brings about some optimization methods in terms of substrate material selection, stack up design, routing rules and anti-interference design in order to solve the integrity problem of all kinds of signals in the process of FDR high-speed PCB design.

For FDR high-frequency signals, transmission line loss is the problem concerning signal integrity. When FDR signals are transmitted from transmitting terminal to receiving terminal along interconnection channels, because the high-frequency attenuation is much bigger than low-frequency attenuation, serious deformation has taken place to the signal waveform arriving at the receiving terminal. The deformation is mainly classified into two aspects: the voltage swing of signals has greatly decreased while bad degradation has taken place to signal rise edge. The former limits the transmission distance of signals while the latter leads to interference between codes. Transmission line loss A can be regarded as the sum of conductor loss Acond and dielectric loss Adiel as shown in Formula (1): A = Adiel + Acond.


Dielectric loss refers to the loss generated by the medium of substrate material, mainly determined by the attribute of material and unrelated with geometric construction including conductor width, positive proportional to frequency, which is shown in Formula (3):


Based on Formula (2), the increase of line width is capable of reducing conductor loss. However, in the practical PCB design, the width of conductors can never be indefinitely wide as a result of limitation of spacing between pins, board, number of signal layers and impedance. The commonly-applied conductor width/spacing/width in FDR design is usually 7mil/7mil/7mil or 8mil/10mil/8mil. When the conductor width is the same, conductor loss is positive proportional to conductor length, without any relation with material. Therefore, to reduce the overall transmission loss, only dielectric loss has to be taken into consideration. Based on Formula (3), dielectric loss is proportional to dissipation factor and the application of small dissipation factors can be helpful to the reduction of dielectric loss, leading to the loss of overall transmission.


Table 1 lists the attribute parameters of three ordinary high-speed board material and loss values calculated according to Formula (1), (2) and (3) when transmission rate is 14Gb/s, conductor width 8mil and impedance 50Ω.

For PCB design, circuit board structure and stack have to be taken into consideration first. Usually, the pattern and shape of circuit board has been determined and the determination of stack number lies in signal frequency, circuit board pin density, PCB fabrication cost, manufacturing period and reliability requirements. FDR interconnection switch boards have high frequency and density and application of multi-layer boards is the necessary step to reduce interference. In addition, the determination of stack number is crucial.

FDR features the package of BGA (Ball Grid Array) with an area of 50mmx50mm, 1157 pins and spacing of 1.0mm and P/N pins at the ports of Tx and Rx are distributed according to 3 concentric circles. Theoretically, 3 signal layers can be applied to lead all the pins at all ports out of BGA. With the following two elements considered, two signal layers can be used to access a group of pins of concentric circles.
a. Owing to the limitation of spacing, the line width/spacing/width of differential lines is 4mil/4mil/4mil and it will be expanded into 8mil/10mil/8mil coming out of BGA and the distance between differential line pairs should be no less than 50mil. Therefore, a pair of differential lines has to take up a width of 2mm and 48 pairs of signals are along the edge with the biggest density. So it's difficult to implement this method.
b. Spacing between BGA pins is 1mm. If a signal layer is applied to access a group of concentric circle signals, the spacing between differential line pairs under BGA is only 14mil that is far from the required 50mil. Moreover, the max parallel routing length is only 20mm, which will generate some crosstalk.


To avoid the negative factors mentioned above, two signal layers are applied to access a group of concentric circle signals and differential signal at each signal layer has to be led out of BGA according to 50mil spacing. Therefore, at least 6 layers are required by FDR interconnection boards to make all the differential signals led out of BGA. With the connectivity and routing amount of board and enough board surface for exchange coupling capacitor considered, 8 internal signals and 22 layer stack are applied. 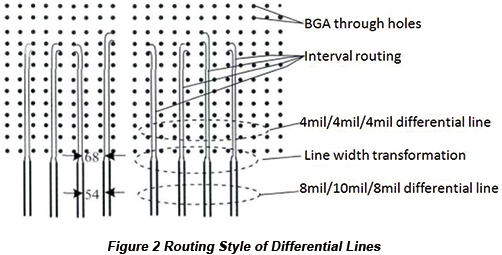 
• Preventing Tx and Rx from being routed in the same layer


In the PCB circuit with high frequency and high speed, RF energy is coupled by PCB power layer and ground layer and edge magnetic flux leakage is generated between power layer and ground layer. The radio RF energy can be radiated to the free space. 20H rule indicates that if there are high-speed currents on the board, there are electromagnetic fields associated with them. In the design of this article, the distance between all the routings and board edge should be at least 20 times of line width and the distance between high-speed differential holes and power plane cut-off lines is at least 5mm.


• Routing on the surface layer


In the design of high-frequency PCBs, with the relatively big far-end crosstalk between microstrip lines and strip lines considered, high-speed differential lines are prohibited on the surface layer. In the design of this article, at most 8 internal routing layers are required owing to the limitation of manufacturing craft. Moreover, the terminal arrangement limitation of interconnection chip makes it impossible for internal layers only to implement the connections of the interconnection differential lines between 6 chips inside connection board.