This article offers a PCB design scheme on high-speed password card based on PCIE according to the benefits of PCIE high-speed serial transmission.

FPGA chip EP4CGX50CF23C6N belonging to Cyclone IV GX designed by Altera is applied in this design, integrating PCIE IP hardcore module and implementing 4 high-speed data transmission password card design. Four types of chips, chip 1, chip 2, chip 3 and chip 4, are capable of respectively implementing algorithms of SM1, SM2/SM3, SM4 and SSF33 and implementing functionalities of password card initialization, secret key administration, backup and recovery and authority management. Password cards are applied in PCs, connected with main board in PCs through PCIE slot and controlled by PCs. IP hardcore in FPGA is applied to implement PCIE, leading to the communication between PCIE core and SRAM cache and control module. As the control center, NiosII implements the function of password card software. Meanwhile, additional password chip implements the communication between each interface module and password card. The hardware structure design of password card is illustrated in Figure 1 below. 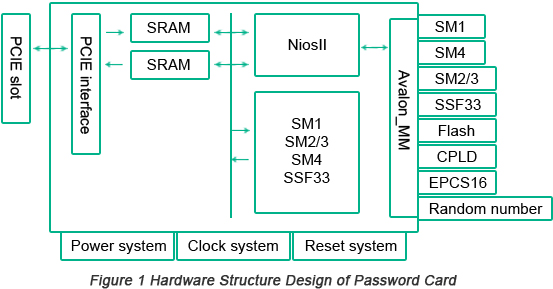 
Stackup design is the most significant problem that should be taken into account and reasonable stackup design can inhibit EMI (Elcetromagnetic Interference) radiation, making transient voltage on power plane or ground layer be as small as possible and shielding the electromagnetic field of signal and power. Generally, multi-layer board and multiple powers are applied in high-speed digital circuit design. PCB stacking design is implemented based on comprehensive elements including circuit clock frequency, PCB fabrication cost, pin density, manufacturing period and reliability. Moreover, layers of multi-layer board should be maintained symmetrical and the number of boards should be an even number since asymmetrical stacking design will cause warpage of boards. The password card designed in this article is connected with PC through PCIE slot and the size and shape of the circuit board is fixed with the height approximately 67mm and length approximately 174mm, configuring PCIE X4 interface pin at the bottom. As a result of the high component density and thick routing, the number of PCB layers is picked up as 6 layers with distribution of signal layer, power layer, signal layer, power layer, ground layer, signal layer. This design containing 3 signal layers, 1 ground layer and 2 power layers, providing the environment required by signal integrity.


After the determination of PCB stacking, component groups and layout should be implemented. First, position of components has to be programmed in accordance with the dimension and pattern of PCB, taking line-connection, functional partitioning and trim and beauty between components into consideration. Then, components have to be reasonably distributed according to different grades of component voltage to make voltage wires as short as possible, which is capable of reducing the interference of power noise and increasing stability of power. Chip placement should pay attention to the relationship between its auxiliary circuit and its chip and to placement of crystal oscillator behind clock pins. High-noise components should be avoided being placed around crystal oscillator and should be near its driving components. Furthermore, the placement of each chip power and signal pins has to be considered with their positions and direction adjusted based on the connected lines. Because the ratio of length and width of password card is more than 2:1 with the positions of PCIE slot, loading holes and indicating LED fixed, component layout for fixed components has to be considered first in component layout. In addition, as a result of the large number of connecting lines between component and FPGA, the component layout should be implemented with FPGA as a center prior to positions of other components so that the top and bottom room of PCB can be effectively used in order to leave enough space between components and components and positioning holes.


In high-speed circuit board design, design of power system is directly related with the success of the whole system. Noise generated by power and ground should be reduced to the minimum in order to ensure the reliability of products. The application of power distribution scheme in the method of layers refers to the fact that power is distributed through the metal on the whole layer, decreasing power impedance and noise and increasing reliability. Because multiple powers are concerned by PCB, multi-power layer design should be applied, capable of eliminating public impedance coupling interference as a noise loop. The application of decoupling capacitance is capable of solving the problem of power integrity since capacitor can be only placed on the bottom layer or top layer of PCB, based on which wires connecting decoupling capacitors should be short and wide. According to chip material, the current passing through power lines can be calculated and width of leads can be determined. The wider leads are, the more current they can carry. The experimental formula is illustrated as: W(line width: mm) ≥ L(mm/A) x I(current: A) 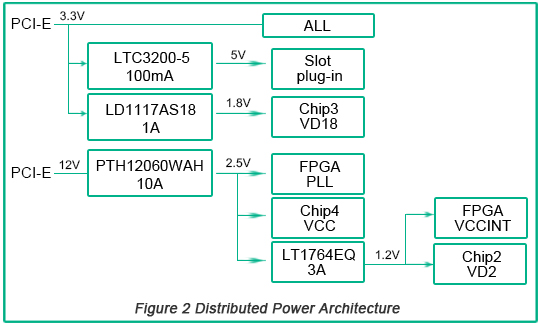 
In the process of design layout for multi-layer PCBs with high density, through holes should be applied, transmitting signal from one layer to another layer to provide electric communication between layers. Position design of through holes has to be implemented with much care. Through holes mustn't be placed on pad and one printed line can be applied for connection, otherwise leading to problems such as tombstone and insufficient solder. Soldermask has to be coated on through hole pad with distance set to be 4 mil and through holes mustn't be placed at the center of pad for chip components on soldering side. The position of thru-holes is illustrated in Figure 3 below. 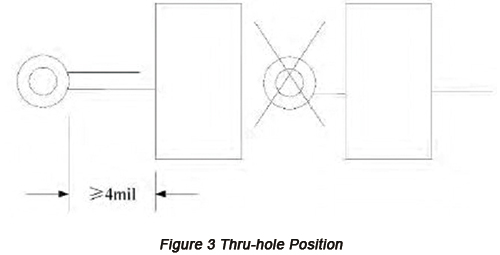 Moreover, thru-hole position mustn't be too near to goldfinger whose plug-in side should contain chamfer. In order to make circuit boards plugged in PCIE slot, chamfer of (1~1.5)x45° can be designed on two side edges of plug-in board.


In the process of routing, distribution has to be adjusted reasonably to make connecting lines the minimum so that crosstalk can be reduced. In the process of high-speed digital signal routing, signal layer near multi-power layer routing should be far away from power reference surface in order to avoid the generation of returning path by signal current.


Since high-speed circuit clock signal frequency is relatively high, the jitter, drifting and deformation greatly influence the system so that high-speed PCB design requires small signal wave interference. Therefore, the problem of clock distribution and routing should be firstly considered. Routing has to be implemented on high-speed clock signals and the routing of main clock signal lines has to be as short as possible, straight and free from thru-holes and power part in order to prevent the crosstalk between clock and power. When multiple clocks with different frequencies are applied on the same PCB, two clock lines with different frequencies mustn't be maintained parallel. However, for multiple components using clock signals with the same frequency, network can be distributed by spider type, tree type and branch type. 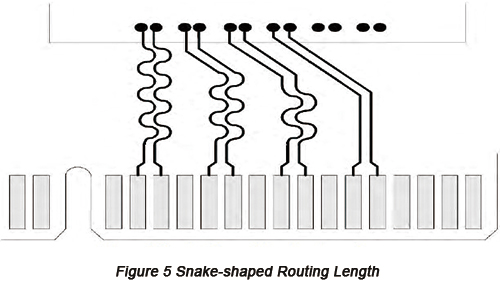 Next articleResearch on High-Speed PCB Design in Embedded Application System