As a company serving for more than a decade in PCB industry, PCBCart is fully aware of the significance of time cost and efficiency for our customers. To minimize time intervals from design files to final products, we've summarized a full list containing confirmation items that'll be implemented by our technical engineers. Sufficient preparations definitely help ensure you a smooth and rapid PCB order.


Prior to sending your PCB design files to us, it's necessary for you to check the following items one by one. NOTE: a summary list of table will be provided at the end of this article for engineers with little time to check images and details.


PCB design software features different versions that naturally generate different PCB design files holding distinctions between each other in some aspects. To cut your time and ensure the accuracy of your design files, we suggest you tell us your software version in Notes when you submitting the order. Naturally, the OPTIMAL selection is to provide Gerber files.

b. Circles as Holes


Circles in the mechanical layer or outline layer without copper and have no corresponding holes in the Excellon file will normally be ignored. If you want them to be drilled as holes, please make a note in your PCB design file. 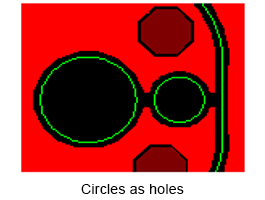 
Two holes in the same pad need to be plated, which is classified into two possibilities: 1). When it comes to two holes in the same copper pad with clearance, spacing of at least 20mil should be left between those holes. Moreover, the two holes should be separately drilled as is indicated in the left image below. 2). When it comes to two slot holes with no clearance between them, they should be shaped as an oval once they are drilled, as is indicated in the right image below. 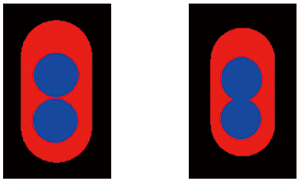 NOTE: when it comes to holes designed at graphic layer, special mark should be used to highlight them and size, angle and depth should be clarified.


PCB marks should be appropriately designed and design rules can be learnt from article Design Requirement of SMT PCBs Part Four: Mark.


V-cut depth should be reasonably designed. Normally it's one third of the board thickness. Mechanical line should be drawn on PCB design file to indicate where to carry out V-cut.


Size of copper annular ring can be figured out by a simple calculation of the diameter of the copper pad minus the diameter of the hole size divided by two. The minimum size of copper annular ring should be 6mil with copper thickness at least 1oz, otherwise it will be broken after completion. The image below is an example in which the annular ring on the left and right of these holes will be broken after completion. 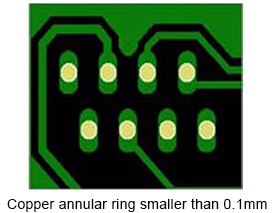 • Spacing between Copper/Trace/Pad and Board Edge 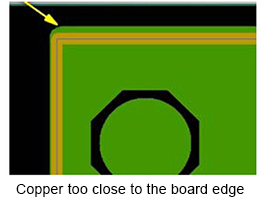 • Spacing between Hole/Via Edge and Board Edge


• Spacing between Via Hole Edge and Pad Edge


Spacing between via hole edge and pad edge should be at least 8mil and covered with solder mask.


• Aperture of Mask/Resin Plugged Via


Aperture of mask/resin plugged via should be 16mil at most.


• Aperture of Micro Via


Aperture of micro via should be less than 5mil.


Spacing between positioning hole edge and pad edge should be at least 0.65mm.


A board must contain pad layer, silkscreen layer and routing layer.


Multiple pads can never be combined together and they should stay independent from each other.


Spacing between copper pads should be at least 5mil. The image below indicates an example of a design in which spacing between the two copper pads is too small, possibly leading to a short circuit once finished. 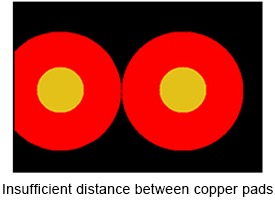 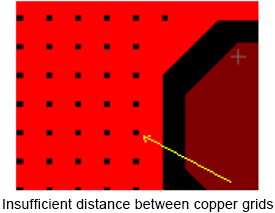 
As is indicated in the image below, the best flower pad with clearance A should be 12mil and 10mil for both B and C. 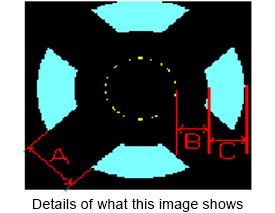 
a. Legend on Copper Layer 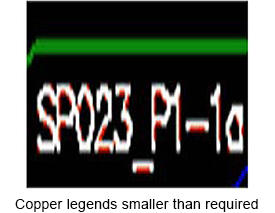 b. Legend on Solder Mask


Solder mask resist openings should typically be 2mil to 3mil larger than copper pads and should be the same shape as copper pads that should have solder mask openings on both top and bottom sides.


b. Shifting of Solder Mask


Solder mask resist opening should NOT be shifted from copper pads. 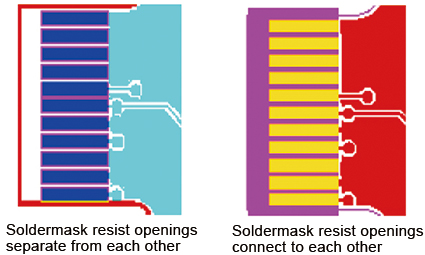 
Position, size and number of drilling holes should be appropriately designed. If you have some special designs, you can make our engineers informed by taking some notes while making your order.


When it comes to flex-rigid PCB design, circuits should be respectively designed for flexible part and rigid part or a schematic diagram of lamination can be generated to clarify rigid and flexible layers.

To make those principles or rules readable, here is a summarized confirmation list table for PCB design dased on PCBCart circuit board manufacturing capabilitiesthat. Make sure you check this list prior to sending your design files to us.

The above listed terms belong to ordinary or standard parameter category, which doesn't mean PCBCart is immune to special designs or requirement. As a matter of fact, all your creative designs deserve to be embraced and be spoken highly of. Therefore, if you have some design issues that are not included among the list introduced above or exceed limits regulated above, you can let our technical engineers know by leaving notes when submitting PCB orders online or explain in detail in extra file besides your design files.