In order to correct the errors generated in the process of PCB fabrication, Mark refers to a set of patterns used for optical localization. Mark can be classified into PCB Mark and local Mark.

The shape and size of Mark should be designed according to the specific requirement of mounters with different models. Figure 1 is a sample of Mark, and the following table shows general requirements of Mark. 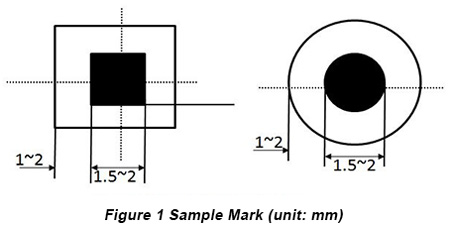 The layout position of Mark is determined by PCB transmission way of mounter. When lead rail is used to transmit PCB, Mark shouldn't be placed near clamping side or position holes and the specific size is different according to mounters. The general requirement is displayed in Figure 2 below.

PCB Mark is a set of patterns for optical localization of the whole PCB.

Local Mark refers to a set of patterns for optical localization of each component with many pins and small spacing between pins (distance between pins and center is no more than 0.65mm).

Whether you are looking for SMT PCB fabrication or SMT PCB Assembly service, PCBCart has the solution to make that happen. Even better, at very fair price! You are welcomed to use below PCB calculators to get your PCB prices. If you have any question on our capabilities or prefer discussing with us before ordering, we are available here.