The electric connection on a PCB depends on the conductivity of copper. As an active chemical substance, however, copper tends to be oxidized when being exposed to atmospheric humidity, thereafter leading to issues that will possibly take place in high-temperature soldering, which badly threatens components' solid fixation on PCBs and reduces reliability of end products. Therefore, Surface finish carries two key responsibilities when it comes to the performance of PCBs: to protect copper from being oxidized and to provide a surface for high solderability when components are ready to be assembled on PCBs.


Board finishes can be classified into different classifications based on different technologies and involved chemical substances: HASL (hot air soldering leveling), Immersion Tin/Silver, OSP, ENIG and ENEPIG, etc. Among all the finishes, OSP is becoming increasingly prevalent owing to its low cost and environment-friendly attributes, which adds more necessity for us to better understand it. That's what this article aims to tell you.

OSP is short for "organic solderability preservatives", and it's also called anti-tarnish. It refers to a layer of organic finish generated on clean and bare copper by adsorption. On the one hand, this organic finish is capable of stopping copper from being oxide, thermal shock or moisture. On the other hand, it has to be easily eliminated by flux in the later process of soldering so that the exposed clean copper can be jointed with melting solder so that solder joints can be generated in extremely short time.


The applied water-based chemical compound belongs to azole family such as benzotriazoles, imidazoles, and benzimidazoles, all of which get adsorbed on the copper surface with coordination formed between them and copper atoms, leading to the production of film. In terms of film thickness, film made through benzotriazoles is thin while that through imidazoles is relatively thick. The differentiation on thickness will bring distinct impact to effect of board finish which will be discussed in the later part of this article.

Actually, OSP has a decade's history which is longer than that of SMT (Surface Mount Technology). Here's OSP's manufacturing process.


The function of "Clean" is to clean off the organic contaminants such as oil, finger prints, oxidation film etc. so as to get copper foil surface stay clean and bright, which is the fundamental demand. This step plays quite a crucial role in preservatives build quality. Bad cleaning will tend to cause uneven thickness of preservatives build. In order to ensure the high quality of finished OSP film, on the one hand, concentration of cleaning solution should be controlled within a standard range through chemical laboratory analysis. On the other hand, cleaning effect is advised to be checked as often as possible and once the effect doesn't reach the standard, cleaning solution should be instantly replaced.


In the process of Topography enhancement, micro etching is usually applied to substantially eliminate the oxidation generated on copper foil so that the bonding forces can be improved between copper foil and OSP solution. The speed of micro etching directly influences the film build rate. Thus, in order to obtain smooth and even film thickness, it's critical to keep the stability of micro etching speed. Generally speaking, it's suitable to control the micro etching speed in the range from 1.0 to 1.5μm per minute.

Nowadays, OSP has been usually applied due to its advantages that are discussed below:
• Simple manufacturing process and Reworkable: Circuit boards coated with OSP can be easily reworked by PCB fabricators so that PCB assemblers are allowed to have fresh coatings once its coating is found damaged.
• Good wettability: OSP-coated boards perform better in terms of solder wetting when flux meets vias and pads.
• Environment friendly: Since water-based compound is applied in the process of OSP generation, it does no harm to our environment, just falling into people's expectations for green world. As a result, OSP is an optimal selection for electronic products catering to green regulations such as RoHS.
• Low cost: Due to the simple chemical compounds applied in OSP creation and its easy manufacturing process, OSP stands out in terms of cost among all types of surface finishes. It costs less, leading to a lower cost of circuit boards in the end.
• Fit for reflow soldering in double-side SMT assembly: Along with the constant development and progress of OSP, it has been accepted from single-sided SMT assembly to double-sided SMT assembly, dramatically widening its application fields.
• Low requirement for solder mask ink
• Long storage time

Get an Instant Quote on OSP PCBs

Since the preservative generated by OSP technology is so thin and easy to be cut, much care must be taken in the process of operation and transportation. PCBs with OSP as surface finish are exposed to high temperature and humidity for such a long time that oxidation will be possibly generated on the surface of PCBs, thereafter leading to low solderability. Therefore, storing methods must stick to these principles:
a. Vacuum package should be utilized with desiccant and humidity display card. Put release paper between PCBs to stop friction destroying PCB surface.
b. These PCBs can't be directly exposed to the sunlight. The requirements of optimal storage environment include: relative humidity (30-70%RH), temperature (15-30°C) and storage time (fewer than 12 months). 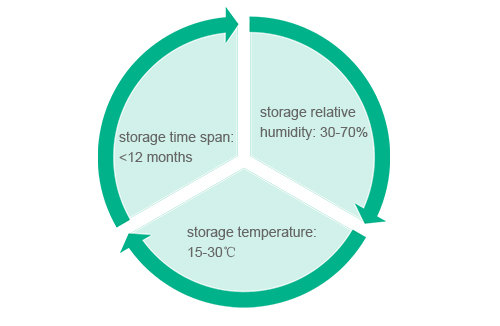 Possible Problem of OSP after Soldering

Sometimes, the color of OSP boards changes after soldering, which mainly has something to do with preservatives thickness, micro etching quantity, soldering times and even abnormal contaminants. Luckily, this probelem can be observed just from the appearance. Usually, there are two circumstances:

For Circumstance#1, in the process of soldering, flux is capable of helping eliminating oxidations so that soldering performance won't be influenced. Accordingly, no more measurements have to be taken. On the contrary, Circumstance#2 occurs because OSP integrity has been destroyed so that flux isn’t capable of eliminating oxidations, which will greatly decrease the soldering performance.


Therefore, following improvements and measurements must be taken to ensure the appearance and performance of organic solderability preservatives surface finish:
a. The thickness of OSP must be controlled within a certain range;
b. The amount of micro-etching must be controlled within a certain range;
c. During PCB fabrication, contaminants (gel residue, ink etc.) must be 100% eliminated in case partial abnormity or badly-performed solderability occurs.

PCBCart Provides You the Best

PCBCart provides quick-turn prototype PCBs compatible with IPC1 and standard PCBs with standard IPC2 with short turn time. High quality and low cost have been our business core since our establishment 14 years ago. Up to now, we've won a customer satisfaction rate as high as 99% from more than 10,000 customers around the globe.


AND, you will be one of them.

Next articleComparison between ENIG and ENEPIG