MVCs refer to the most vulnerable components (MVCs) during reflow soldering such as liquid dielectric aluminum electrolytic capacitors, connectors, DIP switches, LEDs, transformers, PCB (Printed Circuit Board) substrate material etc. Lead and lead-free components differ from each other in terms of their capability to withstand reflow soldering.


As far as simple products are concerned, peak temperature range during lead reflow soldering is from 205°C to 220°C. When it comes to complex products such as some IC packages, however, peak temperature may be as high as 225°C, which is indicated in the figure below.

Time-temperature curve comparison between lead and lead-free reflow soldering is demonstrated in the following figure. 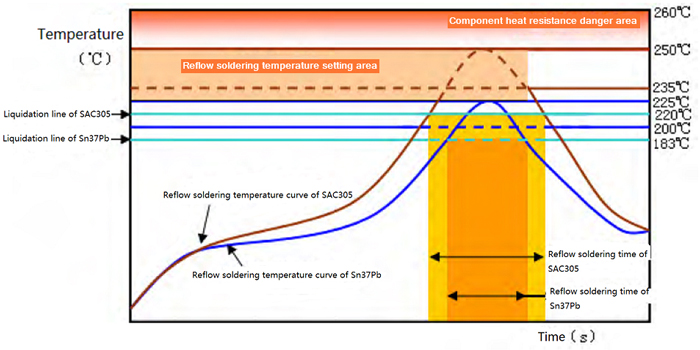 
When lead solder paste (Sn37Pb, Sn36Pb2Ag) is applied with PCB surface finish being HASL Sn37Pb or OSP, if assembled components deviate from pads by 50%, self-alignment can be well implemented.

Rome is not build in one day. Total transition can never be achieved just by one step from complete SnPb soldering system to totally lead-free soldering system. A transient process must be available with lead and lead-free elements coexisting. That's because different apartments in electronics manufacturing industries fail to keep synchronization on lead-free schedule and technology preparation. As a result, soldering defects tend to be caused in this transient process.


For example, when lead-free SAC solder paste is used to solder lead BGA (ball grid array) solder joints, forward compatibility will take place, which derives from the fact that component distributors' lead-free schedule is later than that of PCB manufacturers'. In this situation, BGA solder joints are melted first and covered on solder paste whose alloy isn't melted, leading to massive collapse and oxidation of lead solder balls. As a result, vacancies and internal non-metal slag inclusions will be generated due to difficult expelling of flux solvent and contaminant in solder paste, which are not allowed.


When lead-free solder needs to be cooperated with lead solder paste, backward compatibility will happen. Solder paste (SnPb) coated on pad is melted but SAC solder balls are still not melted. Lead will be dissipated to the boundary of solder ball crystal particles that are not totally melted. How far lead can be dissipated in SAC solder balls depends on how high reflow temperature is set and how soon SnPb solder will be melted in solder paste. As a result, the solder joints are uneven and unstable.


To obtain higher quality and reliability of solder joints, reflow time-temperature curve has to be reset so that SAC solder balls can be completely melted and lead in SnPb solder paste can be absolutely mixed with melted SAC solder balls.


Since the peak temperature of lead reflow soldering is lower than that of lead-free reflow soldering and the accumulated heat by soldered devices is not so high, it's sufficient that the cooling rate of cooling unit maintains a speed at 3 to 4°C/s.


Because lead-free reflow soldering features a high temperature and accumulates more heat, to stop solder joints from cooling and solidification for long time and crystal particles from becoming thick, accelerating cooling can also hinder segregation. Therefore, cooling equipment of reflow soldering equipment should have a higher cooling rate so that temperature of solder joints can be decreased quickly. Cooling rate is usually required to be at 5 to 6°C/s.


Different from SAC alloy, lead will perform as a ball shape when lead eutectic solder goes through fast cooling and all the phases will become refined in the case of accelerating cooling speed. However, the difference lies in the fact that lead features lower hardness than Sn substrate and larger content than Ag in SnAg and SAC alloy.

We understand different projects require different soldering techniques. To meet all demands of clients, we offer both Lead Soldering and Lead-Free Soldering Manufacturing Techniques for printed circuit boards assembly. Want to know how much your PCB Assembly work cost? Click the following button to get a PCBA quote, it does not cost you a penny!