EMC, short for Electro-Magnetic Compatibility, refers to a coexistence state in which electronic devices are capable of implementing their own functions in the same electromagnetic environment. Put it simply, EMC allows electronic devices to work independently and normally with no interference between them, that is, those electronic devices can be compatible with each other in the whole system. Because EMC is achieved by controlling EMI (Electro-Magnetic Interference), it develops with a series of studies concerning EMI such as introduction of EMI, research on EMI, anti-EMI solutions and EMI management.

To reduce interference between digital signals and analog signals, you need to know two fundamental principles of EMC first.
Principle 1: Circuit loop area should be MINIMIZED.
Principle 2: Only a SINGLE reference plane can be applied in a system.

It is advised that digital ground and analog ground on the same mix-signal board should be separated so as to achieve isolation between them. In spite of the feasibility of this solution, lots of latent issues will occur, which are protruding especially in large-scale systems. The crucial problem lies in the fact that tracing fails to be set up across the split between digital ground and analog ground. With tracing set up across the split, both electromagnetic radiation and signal crosstalk will drastically rise. The most commonly seen issue in PCB design lies in EMI occurrence due to signal lines crossing split ground or power.


Figure 1 below depicts the situation introduced above. 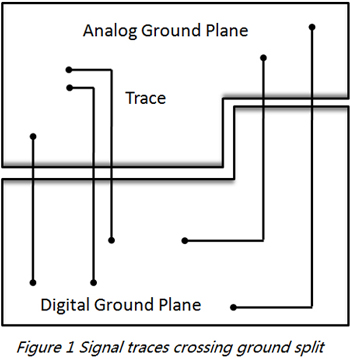 Based on this split method, signal lines have to go across the split between digital ground and analog ground. Then, what does signal circuit return path look like? Suppose that two split grounds are connected together at one point and under this situation, a large loop will be generated by ground circuit. Thereafter, high-frequency circuit flowing across large loop will lead to the occurrence of a large loop with high ground capacitance and radiation generated. If low level analog circuit flows across the large loop, it will be easily interfered by external signals. The worst situation will take place when split ground is connected with power, an extremely large circuit loop will be formed. Furthermore, a dipole antenna will be formed when analog ground and digital ground are connected together through a long lead. As a result, engineers should know the path and method of return circuit in mix-signal PCB design optimization. However, many engineers look upon the flowing path of signal circuit without thinking about circuits' specific path. If ground plane has to be split and tracing has to be arranged across the split, single point connection can be first implemented between two split grounds with bridge formed so that a direct current return path will be provided under each signal line with a small loop area formed, which is indicated in Figure 2. 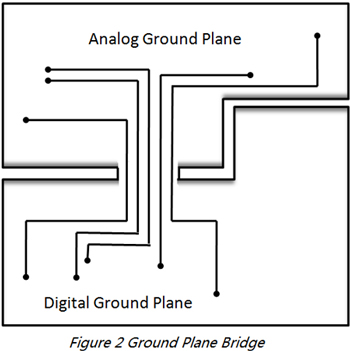 Application of optical isolation devices or transformers also can lead signals across split. When it comes to optical isolation devices, it is optical signals that go across split. When it comes to transformers, it is magnetic field that goes across the split. Another applicable method lies in the application of differential signals. Signal flows into a line while returning from another signal line. Under this condition, ground is not required as a return path.


Split partitioning can be applied in the following three circumstances:
Circumstance 1: Some medical equipment requires a low leakage current between circuit connected with patients and system.
Circumstance 2: Input from some industrial process control equipment may be connected with electromechanical devices with high noise and power.
Circumstance 3: PCB layout suffers from certain limitations.


Independent digital and analog powers are usually available on mix-signal PCBs and split power planes can and should be depended. However, signal lines closely ambient to power planes fail to go across the split between powers and all signal lines crossing this split have to be ambient to conductor planes with large area. In some situations, split issues concerning power planes can be avoided through designing analog power to be PCB connecting wires instead of just a plane.


The occurrence of such issues doesn't derive from absence of split ground but the unsuitable layout of digital signals. When it comes to PCB design, ground plane application, partitioning by digital circuits and analog circuits and reasonable signal layout usually help solving difficult problems concerning layout and partitioning. Moreover, some potential problems caused by split ground can be avoided. As a result, component layout and partitioning become key elements determining the quality of PCB design. If layout and partitioning are suitable enough, current in digital ground will be limited in digital section in a circuit board with analog signals stopped from being interfered. Layout for such situation has to be carefully inspected and checked to ensure layout rules have to be totally conformed to. Otherwise, even an unsuitable signal line layout will possibly lead to the breakdown of a whole circuit board.


When it comes to the system with a single A/D converter, the issue introduced above can be easily solved. With ground separated, analog ground section and digital ground section are connected under A/D converter. When this method is being used, bridge between two grounds should be as wide as that of IC and any signal line shouldn't go across split.


If engineers hold doubt on uniform ground application in PCB design, layout can be implemented based on ground plane split method. In the process of design, board should be accessible to jump wire with less than 0.5inch or 0ohm resistor to connect split ground. Much attention should be paid to partitioning and layout in order to ensure no digital signal lines are placed above analog section and vice versa. Furthermore, any signal line mustn't go across ground split or split isolating powers. To test functions of PCB and its EMC, two grounds should be connected through 0ohm resistor or jump wire and then retest functions of the board and its EMC. Result comparison indicates that in all cases, uniform ground solution is better than split ground solution in terms of functions and EMC.

Mix-signal PCB design is a complicated process. A PCB should be partitioned into independent analog section and digital section and A/D converter should be placed across sections. To separate analog and digital powers, split between isolated power planes shouldn't be crossed and signal lines that have to be crossed should be arranged at the circuit layer that is ambient to large area. Where return path current flows and how it flows should be analyzed so that suitable component layout and correct layout rules should be conformed to. In all layers of a circuit board, digital signals can only be laid out in digital sections whereas analog signals can only be laid out in analog sections.

If you ever completed a pcb design and need someone to help bring it into real circuit board. Please feel free to reach us for solution. We've over a decade' experience in custom PCB manufacturing. We've all it takes to fabricate your PCBs with all the functions you demands quickly and cost-effectively.

Next articleLayout and Tracing Rules for Box Build Assembly