Nowadays have witnessed wide applications of RF/Microwave PCBs in numerous handheld wireless devices and commercial industries including medical, communication, etc. Since RF (radio frequency)/Microwave circuits are distributed parameter circuits that tend to generate skin effect and coupling effect, interference and radiation in circuits are difficult to control in practical printed circuit board (PCB) design. The commonly occurred issues include cross-interference between digital circuit and analog circuit, noise interference caused by powers, and similar interference issues caused by absurd layout. As a result, how to balance advantages and disadvantages in PCB design and try to shrink interferences is a crucial aspect for RF/Microwave PCB design.


Every design differs, but experience plays an active role as a great teacher and the manufacturing engineer is capable of providing solutions to the major pitfalls. Detailed PCB design guidelines concerning RF/Microwave PCBs will be introduced and discussed in this article.

How to determine substrate materials?

As an early stage in circuit design, PCB substrate material selection plays such a key role in RF/Microwave PCB design that optimal substrate material contributes to excellent performance and high reliability of end products. When considering substrate material in conformity with your PCB design, some aspects have to be focused like relative permittivity, loss tangent, thickness, environment etc. The following content will detail their significance and ideal selection approaches will be displayed.


In advance of final substrate materials determination, some parameters have to be confirmed including line width for a certain range of board thickness, wavelength of circuit working frequency and approximate dimensions of leading components. A sketch of circuit board diagram has to be drawn in order to establish acceptable maximum and minimum relative permittivity.


Moreover, relative permittivity deviation provided by substrate material manufacturer has to be low enough to make electric performance within a tolerance range.


Dielectric loss is a function concerning loss tangent and relative permittivity. As for some substrate materials, dielectric loss per unit length can possibly be offset by application of shorter lines that can reduce conductor loss as well, which is vitally important when conductor loss becomes obvious in high-frequency situation. Thus, when parameters of component loss in some circuits are being estimated, it is loss per unit length or frequency that is estimated instead of ordinary loss per unit line length under given frequency.


Within a certain frequency range, substrate material loss has to be low enough in order to meet input/output power requirements with heat dissipation issues avoided. Furthermore, power response of some circuit elements (such as filters) has to maintain a sharp frequency roll-off characteristic so that electric performance requirement can be met. Naturally, dielectric loss can impact this frequency characteristic.


• Other Design Rules Concerning Substrate Material
a. Adhesion of copper coil must be high enough to withstand application and manufacturing environment so as not to cause permanent damage.
b. Relative permittivity changes with temperature, which will possibly influence electric performance within working temperature range.
c. Reliability of surface mount devices (SMDs) and plated-through holes (PTH) is associated with CTE as well.
d. Thermal conductivity of substrate material will affect design with thermal management issue considered.
e. When deciding housing and mounting, board warpage should be considered in advance.
f. Mechanical performance will probably affect assembly and mounting design.
g. Specific gravity of substrate material determines weight of circuit board.
h. Coefficient of thermal expansion (CTE) has to be carefully considered in the process of limit environment temperature and high-power components designing and application of reflow soldering or other high-temperature manufacturing.
i. Electrical resistivity will probably be an element associated with electrical performance, especially when high-impedance lines transmit high voltage, power amplification circuit, for example.

How to process electrical characteristics?


Among all possible transmission structures, such as stripline (definition of stripline will be introduced in Section a below), microstrip, bipolar pulse or groove, stripline and microstrip are most widely applied in microwave circuit design and generally depend on soft base material. For either stripline or microstrip, ratio between ground distance and conductor width, conductor thickness and distance between coupling conductors strongly influences characteristic impedance and attenuation coefficient. Within a certain frequency range and on a structure of transmission line, attenuation coefficient, relative permittivity and characteristic impedance may feature frequency dependability.


When cross-section size of stripline or mircrostrip is larger than wavelength in dielectric, other (higher) transmission mode becomes significant, which makes electrical performance of transmission lines weakened. As signal speed and frequency rise, dimensions of transmission lines must be proportionally decreased to avoid higher order modes, requiring application of thinner substrate materials with given characteristic impedance maintained.


Stripline is a transmission line structure, including a signal line and two wider grounds that are parallel to the signal line that is clamped between. The figure below demonstrates a typical stripline in a sectional view excerpted from IPC-2252. 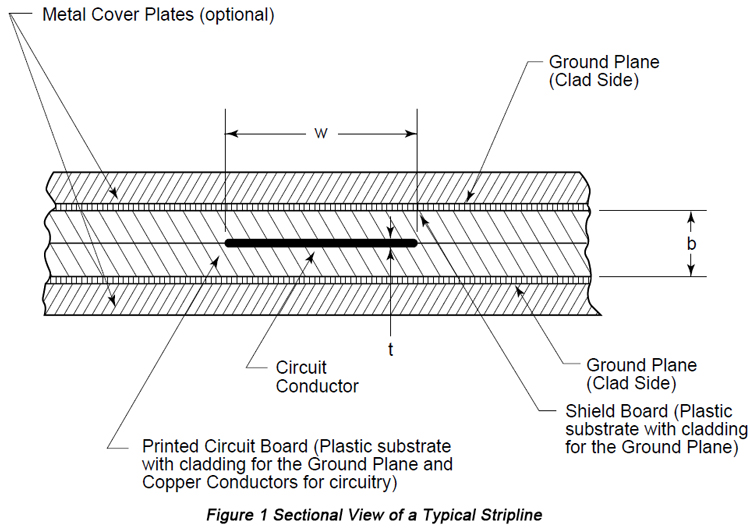 
Value of Y caters to formula:

In this formula, Cf refers to fringing capacitance and conforms to the following formula:


When coupling is highly required between signal lines, asymmetric stripline structure has to be depended, compromising two signal lines that are located in different surfaces and separated by dielectric. Coupling is carried out through parallel lines or crossing lines. When it comes to high-frequency circuit design, coupling isn't needed, the structure of vertically crossing signal lines doesn't work.


Microstrip is also a type of transmission line structure, including a signal line and ground that is parallel to the signal line.


Characteristic impedance formula of microstrip is based on a simple model of microstrip containing only one dielectric that is a conductor with none thickness. The formula goes like Formula 7

How to arrange other significant aspects?


a. Dimensions and Tolerances


True-position dimensions and tolerances that are simply marked make manufacturers arrange deviations within positions and dimensions at any proportion, which usually leads to increased manufacturability. As a result, designers ensure functionality requirements and provide manufacturers sufficient freedom by which leading deviation can be arranged in the manufacturing process where accuracy is the lowest.


Position tolerance capacity mainly depends on material type, thickness and overall size of components. A true-position diameter of 0.254mm (0.01inch) is the most commonly seen and the easiest to be obtained. When tolerance requirement is required to be higher than 0.152mm (0.006inch), manufacturability will be compromised. When it is suitably required, however, the maximum material condition should be required to allow manufacturers to balance between aperture error and position error to increase manufacturability.


When minimum material condition is applied, tolerance is established according to maximum diameter. "Regardless of feature size" refers to application of mark tolerance without extra tolerance and characteristic dimension tolerance is determined according to acceptable different manufacturabilities.


Although both true-position dimension and tolerance can be applied in any case that can be imagined, they are best applied to features similar to positions of hole, pockets and the other X and Y axis.


Hole diameter can be regulated to be prior to metallization and post metallization. Metallization makes hole diameter shrink two-fold plated thickness. Aperture error after metallization is limited by error that occurs during hole drilling and metallization. Although more rigorous tolerance can be achieved, a tolerance zone of 0.13-0.25mm (0.005-0.01inch) is the most commonly seen. Generally speaking, cost and difficulty level rise with the reduction of aperture diameter tolerance. An empirical rule says: if aspect ratio is larger than 4:1, via diameter should be increased to 0.10mm (0.04inch) or more.


Aperture diameter through metallization fails to be accurately forseen owing to plated current density distribution. Difference in terms of local current density leads metalized thickness to be influenced by aperture diameter, hole density, ambient circuit and ground shape. Generally, hole dimension prior to metallization and minimum metallization thickness are regulated to increase manufacturability. When plated-through holes prohibit ground or internal interconnection as a mode, it's suitable to determine minimum plated-through hole. When holes are regarded as lead components, bilateral tolerance should be considered in hole dimensions.


In multilayer PCBs, plated edging has been an acceptable technology in order to reduce mode suppression plated-through holes. Plated edge design should contain three to four 6.4mm (0.25inch)-wide connectors that are responsible for connecting tabs on the whole board. As a result, numerous tabs can be manufactured as a whole board form. Plated edging has to overlap width of at least 1.3mm (0.050inch) of top layer or bottom layer so as to stronger mechanical adhesion. Thickness of metallization should be at least 0.025mm (0.001inch).


Prior to plating, all metal surface and exposed dielectric are covered with a layer of coating without electro-plating or conductivity. Then necessary thickness of copper should be plated on the whole board or graphics.


Generally speaking, panel plating is an optimal selection if thickness uniformity is rigorously required. After all, image won't affect plating distribution. Furthermore, when thick metallization is needed, panel plating is capable of sinking a large amount of metal with bridging not formed between images. Conversely, image plating can only be regarded as an optimal selection when trace width/spacing tolerance requires high strictness because copper foil that needs to be etched off is brought together by substrate material with the same level of thickness.


Mechanical performance of plating copper determines thermal shock resistance and thermal cycle resistance of plated-through hole. In the process of soldering assembly and environmental temperature circulation, cracks are possibly generated to plated-through holes. Copper has to be with sufficient malleability to withstand the shock of high temperature and to resist fatigue failure caused by lower environmental temperature. When it comes to high reliability, acid plating copper system is suggested being applied by PCB manufacturers since plating copper is capable of reaching malleability of at least 20% and tensile strength of at least 2.76x108Pa.


In panel plating and image plating, types of holes influence metal distribution. Independent holes receive faster soldering than dense holes. Thickness uniformity level of metal on components is determined by the percent of metal covered in plating area. When holes and image are not evenly distributed, thickness tolerance will be larger. A typical plating copper thickness is ±0.013mm (0.005inch). Once tolerance is ±0.005mm (0.0002inch) or lower, manufacturability will be reduced.


RA copper foil features a lower thickness tolerance than electrolytic copper foil. Therefore, some slight changes take place on copper foil thickness but requirements can still be met. It has been found that thickness changes to ±0.005mm (0.0002inch) on 0.5 to 1oz copper foil.


The final manufacturing accuracy is the sum of deviations from imaging and etching.


Crack is more difficult than lines to be imaged and etched. If possible, it is necessary to regulate cracks to be wider than lines in high-density circuits. When lines and crack width is lower than 0.10mm (0.004inch), manufacturability will be reduced.

In summary, excellent substrate material determination, reasonable and scientific electrical characteristics modification and other significant aspects arrangement, will definitely lead to an accurate RF/Microwave PCB design based on which reliable end products can be fully expected.