Right now, high-speed PCB design has been widely applied in so many fields as telecommunication, computer and graph and image processing and all high-tech value added products are designed towards low power consumption, low electromagnetic radiation, high reliability, miniaturization and light weight. To obtain those targets, through-hole technology (THT) design and implementation is of extreme significance in high-speed PCB design.

Through hole is one of essential parts for multi-layer PCB design. A through hole is composed by three parts: via, pad and isolation area of power plane, which can be demonstrated in the following image. THT is obtained by plating a layer of metal on hole wall in a way of chemical deposit so that copper foil from each internal layer or plane of a circuit board can be connected with each other. Two sides of through holes are generated in the shape of an ordinary pad, both of which can be directly connected with tracing on top and bottom layers and can be maintained unconnected as well. A through hole plays a role in electrical connection, fixation and positioning components. 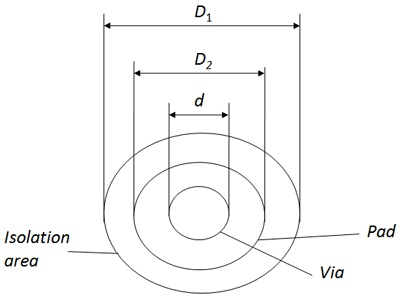 As far as THT is concerned, through holes are generally classified into through-hole via, blind via and buried via:
a. Through-hole via goes through all layers of a circuit board, applicable for internal interconnection or playing a role as a positioning hole. Since through-hole vias are accessible in technology with a low cost, they are widely applied by most PCBs.
b. Blind via refers to the hole responsible for the connection between surface traces and internal traces below with certain depth. Ratio between via depth and via diameter usually doesn't exceed a certain value.
c. Buried via refers to connecting via located in internal layers, which cannot be seen from the appearance of a PCB board because it fails to be expanded to the surface of circuit board.


Both blind vias and buried vias are located in internal layers of circuit board and they are generated prior to lamination.

Non THT (includes blind via and buried via)

When it comes to non THT, applications of blind via and buried via are capable of dramatically reducing PCB size and quality including layer count, improving electromagnetic compatibility (EMC) and getting cost minimized. Moreover, design task will become much easier. In traditional PCB design and PCB manufacturing process, through holes usually bring forward many issues. Firstly, they account for majority of effective space. Second, too high density of through holes brings a challenge towards internal tracing of a PCB board.


In PCB design, although the size of pad and through holes is constantly reduced, aspect ratio will rise when board thickness goes down non-proportionately and reliability will be reduced when aspect ratio increases. With the maturation of laser drilling technology and plasma dry etching technology, non-THT small blind vias and buried vias have become another possibility. When the diameter of those holes is 0.3mm, parasitic parameters will be one tenth of that of traditional vias with PCB reliability going up.


With non-THT applied, number of large through holes will go down on PCB board, so more space can be left for tracing. Rest space can be used as massive-area shielding in order to improve EMI/RFI performance. Moreover, more rest space can be also used as partial shielding for internal components and key network cables so that they can feature optimal electrical performance. The application of non-THT vias makes it easier for component pins to penetrate through so that tracing can be easier for high-density pin components such as BGA (ball grid array) components.

In accordance with parasitic properties of THT mentioned above, we can see that THT that looks simple tends to bring forward large negative effect to circuit design in high-speed PCB design. To reduce the bad effect deriving from parasitic effect of THT, the following tips are provided as a reference:
a. Suitable THT size should be picked up. When it comes to PCB design with multiple layers and ordinary density, THT should be picked up with through hole parameters being 0.25mm, 0.51mm and 0.91mm respectively for vias, pad and isolation area. High-density PCBs can also select through holes with parameters being 0.20mm, 0.46mm and 0.86mm for vias, pad and isolation area. Non-THT is also selective. For through holes concerning power or ground, large-size through holes can be selected to reduce impedance.
b. The bigger isolation area in power plane is, the better. As far as through hole density is concerned, the value of D1 is usually the sum of D2 and 0.41mm.
c. It's optimal to arrange signal traces not across layers, that is, number of through holes should be minimized.
d. Thinner PCB is leveraged to be beneficial to parasitic parameter reduction.
e. Through holes should be placed as closely to power and ground pins as possible and lead between THT and pins should be as short as possible because they will lead to inductance improvement. Furthermore, leads of power and ground can be as thick as possible to get impedance decreased.

Of course, specific issues should be specifically analyzed during PCB design phase. Two other aspects can never be avoided: cost and signal quality. Balanced considerations should be taken during high-speed PCB design to capture optimal signal quality with acceptable cost.