Internal Thermal Dissipation Design of PCB based on Thermal Model

Fast development of electronic technology leads to instant improvement in terms of computational speed, computational frequency and integrity of electronic products. Besides, with the volume of electronic products shrinking, volumetric power density is becoming increasingly high. In addition, the development orientation of thickness, lightness and miniature all make electronic components feature increasing calorific value of unit volume. With the upgrading of electronic products, their reliability is badly influenced as a result of fast increasing density of heat flow in PCBs. According to 10 degree principles, each time temperature rises by 10 Degrees Celsius, part of parameters of some components will decrease by a half. Based on a research, 55% of electronic devices are damaged because the temperature bypasses rated value of components. Therefore, reasonable component layout and PCB thermal dissipation has been the main elements engineers must consider.


Thermal design of electronic products is usually divided into the following levels: system level, board level and package level. Board level thermal design refers to the thermal design of radiator, electronic stencil and PCB. This article will provide a new method of dissipating heat that makes heat at the bottom of components fast transmitted to the outside and increases the thermal dissipation area of components without influencing PCB layout, which aims to reduce the temperature of components and temperature difference. Compared with traditional method of thermal dissipation, this new method has some attributes including multiple thermal dissipation structures, reduction of PCB thermal strain and small space occupation. The overall PCB thermal dissipation is anisotropic as a result of multiple patterns of PCB layers including top layer, bottom layer and routing layer that leads to the multiple features such as copper content, copper thickness, through holes and positions. Based on thermal analysis software and physical shape and thermal features of components, this article will set up simplified PCB and components and discuss the length, width and quantity of cooling fins with experiment results coming out through simulation data analysis of different conditions.


According to Fourier's law on heat transfer theory, at the differential layer with any thickness of d along the direction of x, energy passing d at unit time is directly proportional to the area A of temperature change rate, which can be displayed in formula


Density of heat flow q (W/m²) refers to the amount of heat flow passing through unit area A within unit time, which is shown in formula

PCB is such a type of complicated multi-layer structure that its heat conduction is anisotropic. In terms of PCB thermal analysis, the material structure in each layer is different so that it's difficult to set up a model because of large grid numbers and slow computation speed. This article uses a simplified model with the help of thermal analysis software. The simplified multi-layer PCB model is displayed in Figure 1 below. 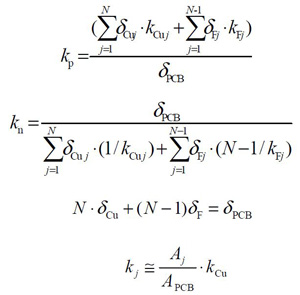 The temperature of PCB surface layer and bottom layer is respectively t1 and t2; the overall transmitted heat is Q; the overall resistance is R; the thermal resistance of each layer at thickness orientation is R1, R2 and R3 and at length L1, L2 and L3; the area of the board is A. Based on Figure 2(a), the orientation is supposed to be vertical only and thermal resistance can be calculated through the following formula:
R1 = L1(A•k1)
R2 = L2(A•k2)
R3 = L3(A•k3)


The overall heat resistance along vertical and horizontal orientation can be displayed according to series-parallel connection of thermal resistance through formula Q = (t1 - t2)/R.


Based on the formula above, it is clear that overall thermal resistance on horizontal orientation is much lower than that on vertical orientation. Therefore, if copper is buried horizontally on PCB, better thermal dissipation effect will be obtained. A double-layer PCB is picked up by this article as an analysis object. Figure 3 is the sketch of PCB buried copper.


The size of simplified model is listed in below table.

Component is placed at the center of PCB whose heat source has copper buried below. Copper cooling fins are buried adjacent to copper. Figure 4 is the simulation model with size of 0.5mmx30mm. 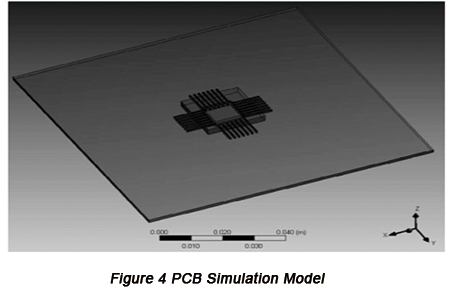 A circuit with 2A current is set as a simulation object so that line width is 0.5mm at least and through-hole 0.5mm. Cooling fins adjacent to buried copper should have min 1mm spacing and the width of cooling fins in this article are defined to be 0.13mm, 0.25mm, 0.5mm, 0.75mm and 1mm and length 20mm, 30mm and 40mm. Under the condition of 10mm width and less than 1mm spacing, the number of cooling fins with different width is displayed in below table. 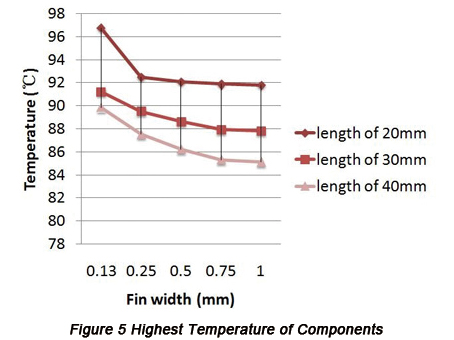 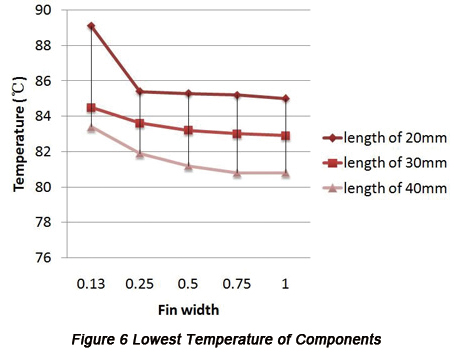 From the change tendency indicated by the graph, it can be summarized that when the width of fins is less than 0.5mm, the temperature of components is greatly decreased with the enlargement of fin width. Temperature reduction becomes steady when the width is more than 0.5mm. Thus, temperature difference is the largest when fin width is kept 0.5mm with the lowest material cost. With the increase of cooling fins, component temperature decreases. 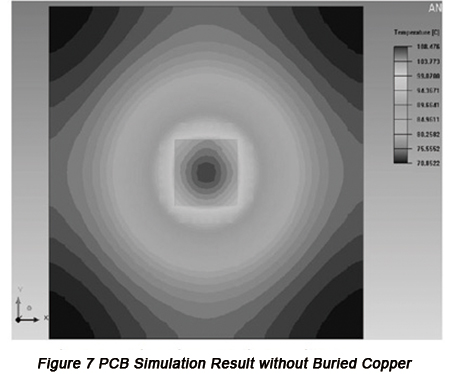 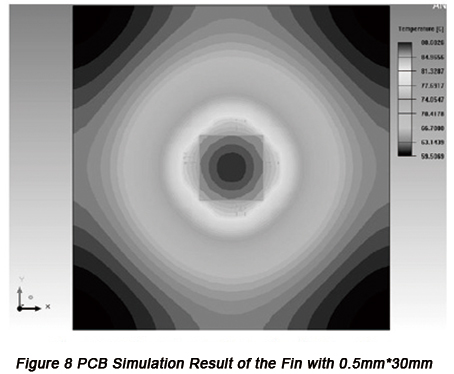 Next articleDesign of High-Power PCB in High Temperature Environment