In Figure 1, among the two parallel lines, one line has signal source (VS) and internal impedance (ZOG) at one end of the line and load impedance (ZLG) at the other, forming a closed loop through ground. The other line only has resistance (ZOR and ZLR) with a structure of single wire to the ground. In this figure, the lead with signal source is called emission line or interference line while the other line is called receiving line or interfered line. 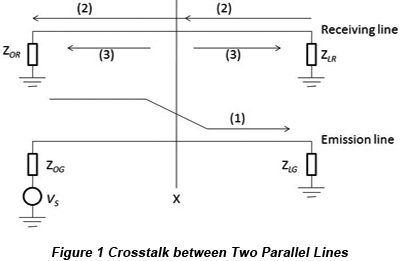 In this article, the printed circuit board used in the simulation model has a size of 20x60mm (width x length) with epoxy laminated glass fiber FR-4 as the substrate material whose dielectric constant is 4.7. Figure 2 shows the sectional view of the simulation model.

), the characteristic impedance of micro-strip line is 50Ω.

In Figure 3, the first port (P1) of emission line is the interference source port. Each port of emission line and receiving line is connected by the characteristic impedance (50Ω), so crosstalk signal will be absorbed when it reaches the near end and far end of receiving line and it won't return to influence crosstalk. As a result, two micro-strip lines form a 4-port network whose parameters S13 and S14 can be calculated respectively:

• Crosstalk intensity with the change of frequency


Ordinary signals are a result of the adding of sine waves with different frequencies and ranges so it's meaningful to study how crosstalk of two micro-strip lines changes with the frequency of a single sine wave.


To better reflect the rules, Figure 4 is obtained with wiring distance (D) with values of 1mm and 3mm, displaying how crosstalk changes with the frequency. 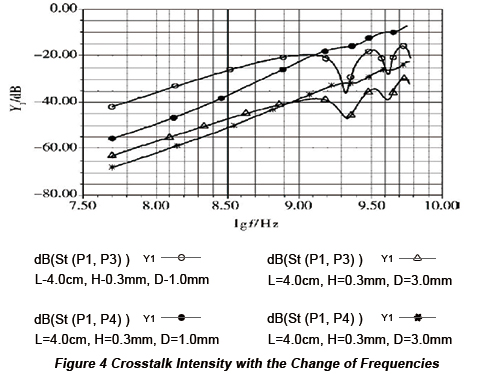 • Crosstalk intensity with the change of wiring distance


When the wiring distance (L) is 40mm, substrate thickness (H) 0.3mm and signal frequency 2GHz and 5GHz, the simulation result of the crosstalk intensity with the change of wiring distance is shown in Figure 5. 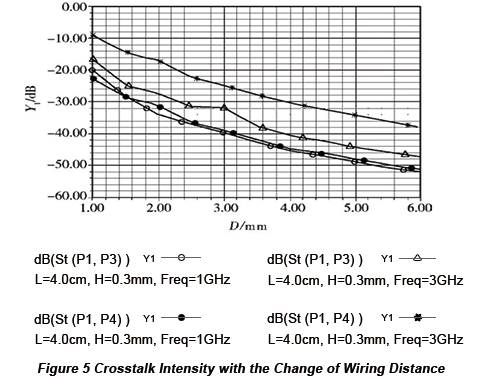 In this figure, both near-end crosstalk and far-end crosstalk decrease as the wiring distance becomes larger. When wiring distance starts to increase from 1mm, the crosstalk decreases quickly but with the increasing of the distance, the decrease of crosstalk becomes slow. Obviously, when the distance is larger than three times of the width, the crosstalk between lines can't be improved by enlarging the distance between lines. This is because when two micro-strip lines get too close, both mutual capacitance and inductance will become so prominent that crosstalk will substantially rise.

• Crosstalk intensity with the change of wiring length

When the wiring distance (D) is 2.0mm, substrate thickness (H) 0.3mm and signal frequency 1GHz and 5GHz, the simulated result of the crosstalk intensity with the change of length is shown in Figure 6. 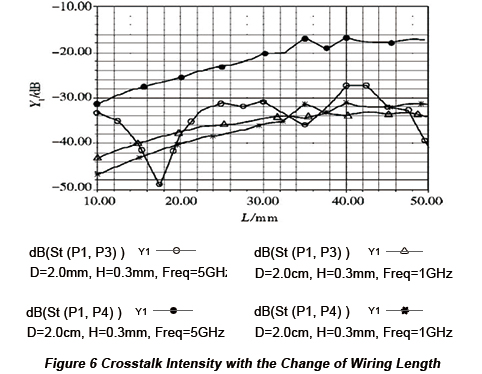 In order to maintain the micro-strip line characteristic impedance at 50Ω, the value of W/H must be kept 1.82. Therefore, in the simulation model, the ratio between line width and the height of image plane is kept 1.82 as well.


a. When the wiring length (L) is 40mm, the distance between the two lines and their edges 1.0mm and signal frequency 2GHz and 5GHz, the crosstalk intensity with the change of image plane thickness is shown in Figure 7. 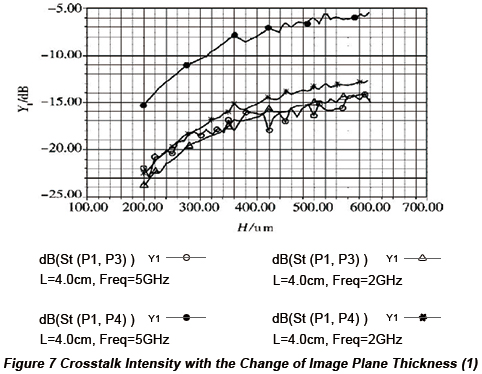 
b. When the wiring length (L) is 40mm, distance between lines two times line width and signal frequency 2GHz and 5GHz, the crosstalk intensity with the change of image plane thickness is shown in Figure 8. 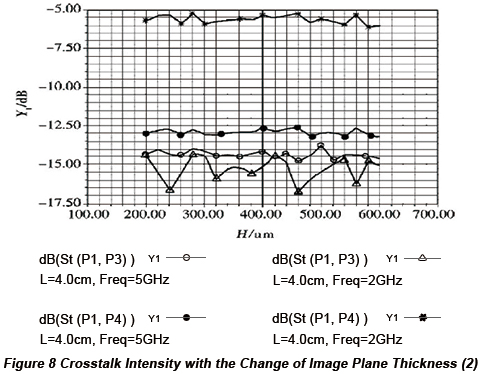 According to Figure 8, crosstalk intensity changes little with the distance between two lines multiple of the line width.

Next articleMethods to Strengthen the Anti-Interference Ability in PCB Design