With the flourishing and wide application of laptops, it has become overarching to improve product quality and manufacturing efficiency and key technique and product quality control in the process of laptop production have attracted the most concentration. Based on the analysis on key technique in terms of PCB design, miniature components assembly technique, production line design and PCB cleaning, this article studies how to increase the efficiency of automatic machine assembly and yield rate of products. Through the adjustment of product design and key technique and effective quality control, automatic equipment is capable of meeting the requirement of laptop assembly features in order to provide effective quality insurance to the application of automatic devices in laptop industry.


Most laptops in present market are so ultrathin that their PCB has to be covered with microcomponents, which then sets higher demands of assembly. Therefore, it is of significance to select suitable component package when design the circuit board. Based on demands in terms of technique, equipment and overall design, SMT package form and structure are selected for components whose electric performance and functions have been determined, which plays a deciding role in circuit design density, productibility and testability. Every type of component have a lot of packages each of which can be a choice for engineers, so it's best to know about component specs and accuracy of components that are available in the market prior to determination.


Based on laptop PCB assembly manufacturing, FR4 A1 level copper coating board is usually selected with advantages including relatively high mechanical properties, excellent thermostability and moisture resistivity, excellent machinability. The properties of FR4 A1 level are displayed in below table.

The constant miniaturization of components leads to increasing higher requirement in terms of component assembly technique. Prior to assembly, assembly form should be determined first according to component layout on PCB of laptop. Owing to the high integrity of PCB in laptops, microcomponents account for most of components on PCBs that are usually multi-layer PCB. In this research, a type of double-surface mixed assembly technique is applied with the procedure chart displayed below. 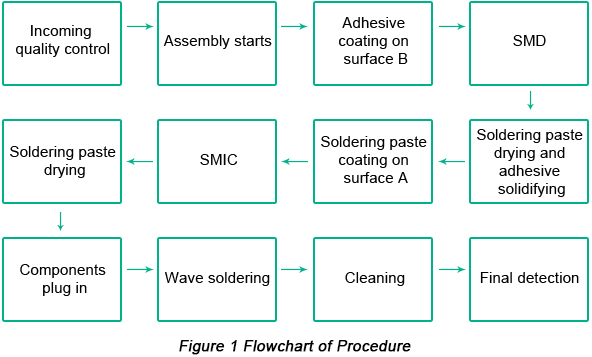 
b. Automatic mounter. It plays a role as the hand of a robot, capable of taking components from the package according to programmed procedure and mounting them on the corresponding positions on PCB. Mounting function and production capacity of SMT production line depends on the function and speed of mounter. Windows XP operation system is applied in mounter with features of flexibility, practicability, reliability and maintenance. MNVC camera and numerous FEEDERs are picked up, suitable for mounting of small chip (0201), thin chips and QFP. The mounting speed reaches 12500CPH (laser) and 3400CPH (image), which is suitable for the continuous printing of QFP that features fine spacing and SOP. Mounting accuracy reaches ±0.05mm with the mounting size in the range from 50x30mm to 330x250mm.


c. Reflow oven. It is placed after mounter on SMT production line, playing a role in providing a heating environment and melting tin paste that is distributed on the pad of PCB in advance. It can be regarded as a soldering device reliably combining SMT components with PCB pad through soldering tin paste alloy. The rail adjust range of the device is in the range from 50mm to 400mm, temperature control from room temperature to 300°C, temperature control accuracy ±1.5°C, temperature rising time 30min. PCB transmission means lies in Chain+Mesh.


f. Rework equipment. It plays a role in reworking on problematic PCB with the tools of soldering iron and rework station.


g. Cleaning equipment. It plays a role in eliminating obstacles that influence electric performance from PCB and soldering contaminant such as flux that is bad to people's health. It can be fixed at a stable place.


Voltage of air source should be configured according to devices' requirement. Power of factory can be applied and oil-free compressed air machine can be independently configured. The general requirement is that voltage should be more than 7kg per square meter and purified air that is clean and dry.


An exhaust fan is configured based on the requirement of devices. For all-hot brazier, the ordinary requirement is that the minimum flow amount at exhaust duct is 500 square inch per minute. Workplace has to be kept clean, free from dust and corrosive gas with the environment temperature in the range of 23°C±3°C, relative moisture from 45% to 70% RH.