As contemporary electronics embraces light weight, high speed and increasing efficiency, each link of manufacturing thereafter conforms to such philosophy, which is open to Printed Circuit Board Assembly as well. Soldering has been playing an essential role in determining the success of electronic products since electrical connection achievement derives from precise soldering. Compared with hand soldering that's still preferred by some electronics hobbyists, automatic soldering has been widely selected due to its merits of high accuracy and speed and demands of large volume and high cost-effectiveness. As the leading soldering technologies for assembly, wave soldering and reflow soldering have been most widely applied to contribute to high-quality assembly. Nevertheless, they are always being mixed up and differences between them tend to confuse many and when to use them is even vague.

Prior to formal comparison between wave soldering and reflow soldering, it's important to understand difference between soldering, welding and brazing. 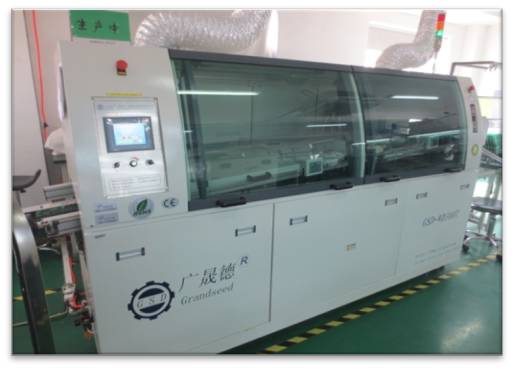 
Step one: Flux Spraying. Cleanliness of metal surface is the basic element ensuring soldering performance, depending on functions of solder flux. Solder flux plays a crucial role in smooth implementation of soldering. Leading functions of solder flux include:
1) To eliminate oxide from metal surface of boards and components' pins;
2) To stop circuit boards from secondary oxidation during thermal process;
3) To reduce surface tension of solder paste;
4) To transmit heat.


Step two: Pre-heating. In a pallet along a chain similar to conveyor belt, PCBs travel through a heat tunnel to carry out pre-heating and activate flux.


Step three: Wave Soldering. As temperature constantly rises, solder paste becomes liquid with a wave formed from whose edge boards will travel above and components can be solidly bonded on boards.


Step four: Cooling. Wave soldering profile conforms to a temperature curve. As temperature reaches the peak in wave soldering stage, its reduction comes, which is called a cooling zone. After being cooled to room temperature, board will be successfully assembled.


As circuit boards are placed on pallet ready to go through wave soldering, time and temperature are closely associated with soldering performance. As far as time and temperature are concerned, a professional wave soldering machine is of much necessity while PCB Assembler's expertise and experience are seldom easy to obtain since they depend on years' accumulation, application of up-to-date technologies and business focus.


If temperature is set to be too low, flux won't be melted so that it won't maintain activity, reaction capability and capabilities to dissolve oxide and dirt on the surface of metal. In addition, alloy won't be generated by flux and metal if temperature is not sufficiently high. Furthermore, other factors such as speed of band carrier, wave contact time etc. should be taken into considerations and calculation.


Generally speaking, even though the same wave soldering equipment is applied, different Assemblers possibly feature different manufacturing efficiency due to different operation methods and extent of understanding on soldering machine. For example, PCBCart (a China-based full turnkey PCB Assembly service supplier) engineers take advantage of fixture to fix THT components prior to wave soldering so that all parts can be accurately mounted on boards with soldering defects dramatically decreased.


Wave soldering can be accepted by THT (Through-hole Technology), DIP (dual-in-line packaging) assembly and SMT (Surface Mount Technology). It is more used in the former. 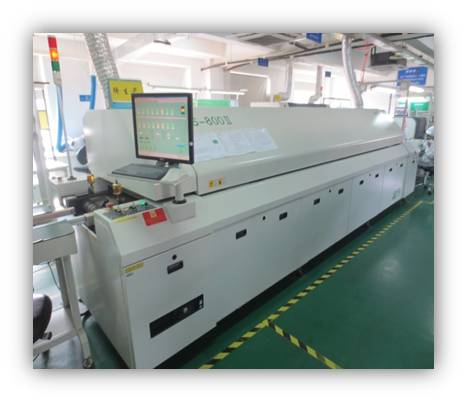 
As its definition goes, electrical components are temporarily attached to contact pads prior to real soldering through solder paste. This process primarily contains two steps. First, solder paste is accurately placed on each pad through a solder paste stencil. Then, components are placed on pads by pick and place machine. Real reflow soldering won't start until those preparations have been fully made.


Step one: Pre-heating. It's not a tough job to understand the significance of pre-heating when comparing reflow solder oven with toaster or baking oven. To achieve well-baked bread, oven should be preheated in advance. Pre-heating features two purposes during reflow soldering. First, it allows boards to be assembled to consistently reach required temperature fully compatible with thermal profiling. Second, it is responsible for pushing volatile solvents contained in solder paste to expel. Otherwise, soldering quality will possibly be compromised.


Step two: Thermal Soak. Similar with wave soldering, reflow soldering also depends on flux that has been contained in solder paste. Accordingly, temperature has to climb to the extent that flux can be activated. Otherwise, flux fails to play its active role in soldering process.


Step four: Cooling. As a temperature curve is depicted, temperature will go down soon after top temperature is achieved. Cooling leads solder paste to solidify with parts permanently fixed on contact pads on boards.

As far as soldering is concerned, difference between wave soldering and reflow soldering can never be ignored because many people have no idea which one to select as they are ready to purchase PCBA services from assemblers. As a Chinese proverb goes: a slight move in one part may affect the situation as a whole. A modification in terms of soldering tends to arouse changes from head to toe in the whole assembly manufacturing process, such as manufacturing efficiency, cost, time to market, gains etc. Based on the introduction above, it's believed that a sketch must have been outlined in your mind.


As for soldering process steps, the following figure demonstrates the difference between them.

The essential difference between wave soldering and reflow soldering in terms of manufacturing process lies in flux spraying in that wave soldering contains this step while reflow soldering not. Flux promotes soldering process and plays a protective role of dioxide elimination and surface tension of reduction material to be soldered. Flux works only when it's activated, which then calls for rigorous requirement on temperature and time control. Since flux is contained in solder paste in reflow soldering, flux content has to be appropriately arranged and achieved.


Soldering defects seem unavoidable as long as soldering takes place. It's non-scientific to purely indicate which soldering technology features more soldering defects than the other even though the conclusion is achieved based on piles of experimental data. After all, situation differs each time. Thus, it's of no significance to compare soldering reliability between wave soldering and reflow soldering.


In spite of the inevitability of soldering defects, opportunity of defect occurrence can be proportionally cut down when assemblers conform to professional assembly manufacturing regulations and get fully aware of characteristics and performance of all the equipment along manufacturing line. In addition, engineering staff should be qualified and regularly trained in order to keep pace with progress of modern technologies.


Generally, reflow soldering works best for SMT assembly while wave soldering for THT or DIP assembly. Nevertheless, it seldom occurs that a circuit board only contains pure surface mount devices or through-hole components. In terms of mixed assembly, SMT is normally first carried out and then comes THT or DIP because the temperature reflow soldering has to go through is much higher than that wave soldering has to suffer. If sequence of two assemblies is inverted, solid solder paste will possibly be melted again with well-soldered components suffering from defects or even falling down from board.

PCBCart is Here to Meet All of Your PCB Assembly Requirements

PCBCart has over ten years' experience in providing circuit assembly services almost covering all kinds of requirements. We can get your boards well assembled either you're looking for Thru-Hole Assembly, SMT Assembly or Mixed Assembly. Click below button to request a FREE PCBA Quote!

Written by PCBCart's editor Dora, this article is originally published on Tech Briefs.

Next articleBGA Components and Their Soldering Technologies in SMT Assembly