PCBs are at the center of any electronics design and all but the most basic PCBs are designed using PCB layout software. As such, your PCB design's success is highly dependent on the capabilities of your chosen PCB Design Software and your ability of using it. With all PCB layout software available, picking the one best suits your PCB layout needs and budget can be a difficult and time-consuming process.


To that end, this article will take a brief look at some of the most popular PCB Design Software Packages currently available on the market, and discuss each one's strengths and weaknesses. This is by no means a complete survey, readers should be aware that there are plenty of other options available. Generally speaking, PCB design software packages cater to two distinct groups: the hobbyist market and professional level developers. This article will present a mix of PCB design packages from both groups, with the first section discussing commercial level PCB packages and the second section discussing professional level PCB design packages.

Commercial Packages are typically used in professional level design environments where formal project management and team based solutions are commonly implemented. Usually, they come with higher end routing and design features, such as differential pair routing abilities, high speed bus routing features and single length tuning tools. They are commonly available with integrated simulation solutions and hierarchical schematic entry. Commonly, they are priced accordingly and can therefore be out of the reach of hobbyist or educational markets. Here are some of the most popular commercial packages currently on the market.

Altium designer is one of the most popular of the high end PCB design software packages on the market today. It is developed and marketed by Altium Limited, which is based in Australia. It includes a schematic and PCB module, as well an auto-router and differential pair routing features. It supports track length tuning and offers a 3D modeling feature.


Pros - while capable of high end product design, it is easier and more accessible then some of the similarly priced packages available on the market. It supports team based development, making it ideally suited for PCB design teams.


Cons -its high price generally prevents individuals and hobbyist from using it to implement designs. Its rich feature set, while convenient once mastered, can also present a significant barrier to entry for new users. As such, it is not typically used in the hobbyist and DIY communities. It is also developed exclusively for the windows environment, which may prevent Mac and Linux users from considering it.


Pros - has an unsurpassed number of signal and design analysis tools available in it. Well suited to professional development environments where high speed designs are developed, its capture will allow for the thorough simulation of your design before it is ever sent away for fabrication.


Cons - difficult of new users to pick up quickly and has a steep learning curve. Also, while it does offer a free version, fully featured versions can be very expensive. It is not commonly used by hobbyist or the DIY community. Since it is only developed for the Windows environment, this may limit its appeal to those more comfortable using Mac or Linux machines.

PADs is a PCB design package developed by mentor graphics. It comes in three trim levels (Standard, Standard Plus and Professional), and is considered a high end commercial grade software package. It has a number of high end features, including signal integrity analysis functions, an advance auto-router, thermal design consideration analysis and support for various project management functions.


Pros - a professional level package with a competitive price point. It publishes online parts libraries through its partquest.com site and has a polished and user friendly interface. It has in support of design documentation production and other team based project management features.


Cons - while lower in cost than some of the comparable professional level packages, it is still priced well above the hobbyist market.

Pulsonix is a full featured PCB design suite. It includes a schematic capture module, a PCB layout module and an integrated SPICE simulation module. It has all the high end features expected of an advanced PCB layout software package, including track length tuning, differential pair routing and push shove routing. Also, it supports hierarchical schematics, which allow for complicated designs to be abstracted into subsystems at the schematic level. It is important to note that there are other lower cost variants of Pulsonix, including DesignSpark and Easy-PC.


Pros - can be enabled to have all of the high end features that can be expected from a full featured PCB design suite. As such, it is well suited to high level professional design environments.


Cons - can be very costly when all of the possible add on features are included in a package. It is also a professional level design suite and has a steep learning curve appropriate to its sophistication. As such, it does not cater to the hobbyist or those new to PCB design.

Multisim is National instruments circuit simulation suite and Ultiboard is a fully functional Multisim add on program for producing PCBs. National Instruments is a well known electronics test equipment manufacturer and simulation software developer. Originally branded as the Electronics Workbench software suite, Multisim was re-branded after being purchased by National Instruments. It has a very strong set of simulation capabilities, including micro-controller simulation, and is tightly integrated with the Ultiboard PCB layout added on software package.


Pros - a very popular simulation software suite and is tightly integrated with National Instruments other test and measurement offerings. It offers an easy to use graphical simulation interface that National Instrument is known for. Ultiboard is a very capable PCB design suite with tight integration with Multisim. There are also several trims of each piece of software available at a wide number of price points.


Cons - while Multisim is widely used as a simulation environment, Ultiboard is much less popular in the PCB layout community. Also, while Ultiboard offers all of the high end features seen in other professional level PCB layout software packages, it is quite costly to buy the highest trim levels of the Multisim/Ultiboard suite. 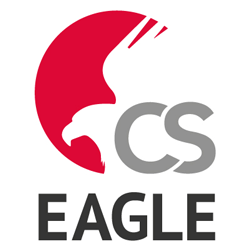 Eagle has received much popularity from hundreds of thousands of engineers, makers, students and even hobbyists in open source hardware communities as a powerful and easy-to-use PCB design tool. Available for Windows, Mac and Linux, it provides a limited free version with restrictions of 2 schematic sheets, 2 signal layers and 80cm² board area.


Pros - easy to learn and has a very large online community with FAQs and tutorials by which even electronic newbies are capable of handling. An expansive user base and community help develop a large number of resources and extensions for it. Plenty of license options to fit every individual user's needs are also available. It is very capable of producing all but the most complex designs, albeit less conveniently than other high end PCB design software packages. Ultimately, it is a very good solution for those that are not developing complex high speed designs.


Cons - It is not considered a professional level package and is not commonly used in commercial settings. It does not have higher end features that allow for the easy layout of high speed signal designs or other routing features, such as push shove routing. Its design work flow is commonly regarded as weakness of the software. Since EAGLE's participation in Autodesk, its merit of low cost is whittling down.

KiCAD is an open source and completely free design package that includes a schematic, PCB and component module. It offers many high end features seen in professional PCB design packages, including push shove routing, hierarchical schematic design, differential pair routing and 3D modeling of PCB designs. CERN has also taken an active role in the development of KiCad, which has led to a great deal of improvements in its capabilities.


Pros - the most obvious benefit to using KiCad is, as an open source software project, it is completely free. Besides the clear advantage of it being free, it is also a very capable package, with several features typically only seen in higher end software packages. There is also a very large community of KiCad users that support and publish component libraries for the software.


Cons - has a significant learning curve and an unorthodox work flow. Its different modules are not well integrated and it takes quite some time to become comfortable navigating between different modules. It has limited or out of date documentation and support.

DipTrace is popular and budget friendly PCB design software package with a fairly robust set of features. It has three main modules: an integrated schematic editor, a PCB layout module and a component management module. It includes an auto-router and a 3D PCB preview capability. Also, it is available for Windows, Mac and Linux (using Wine).


Pros - easy to learn and available in a free, albeit limited, version and has very reasonable pricing for its unlimited version. It is well suited to hobbyist and those new to the creation of PCBs. 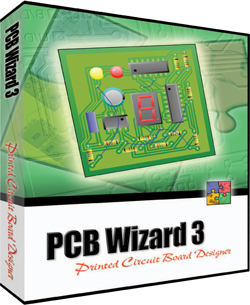 PCB Wizard is a powerful PCB design suite that allows users to create single and dual sided PCB designs. It is designed to have a low learning curve with an easy to use drag and drop interface. It contains a schematic capture component, a board layout component as well as automatic PCB component placement and an auto-router. It is also tightly integrated with other products from new wave concepts (the company that develops it) which allows for the simulation of designs via Livewire and the simulation of prototypes via Control Studio 2. Besides, it allows for the generation of several different types of manufacturing file formats and the generation of Bill of materials reports.


Pros - With a highly user friendly interface and a limited component set, it is perfect for hobbyists and those are that just starting out in the field of PCB design. Offered as freeware, it further lends itself to non-professional users.


Cons - limited to single sided and dual sided PCB board production. And it lacks a 3D viewing component seen in several other software packages.

As can be seen from the software packages presented above, not to mention all of the options not presented here, PCB designers have no shortage of options choosing a design package. Many of the presented packages offer free trials and limited versions for free though, giving you an option to try before purchase. This is especially useful for the more expensive commercial packages, which require a large financial commitment. In the end, the package you choose should reflect your design needs and budget.